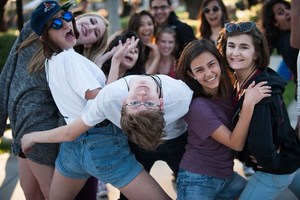 After a year of dedicated preparation, Westmont High's thespian troupe 2904 won several awards at the California State Thespian Festival, a three-day event that annually showcases the best in high school theatre from throughout the state.

Among the winners was junior Rebecca Uddin, who took took home first place in the short film competition for her original film "Medea's Revenge."

Students can also participate in a variety of workshops led by theatre professionals, watch individual performance and tech events, audition for scholarships, or compete in dozens of events with more than 1,600 theatre students from across the state.

Of the 725 students performing monologues, junior Johannes de Quant was selected as the second best monologue performer in the state of California.

De Quant and seniors McGreevy and Anna Benedict also took part in four main stage shows that were produced over the course of 24 hours, one of which featured senior Ella Tarczy as an assistant director for the California playwright project honoring the work of Jonathan Rand.

Meanwhile, sophomore Grace Landers worked with the All-State house staff, and classmate Natalie Rutz operated the spotlight for one of the All Festival Events.